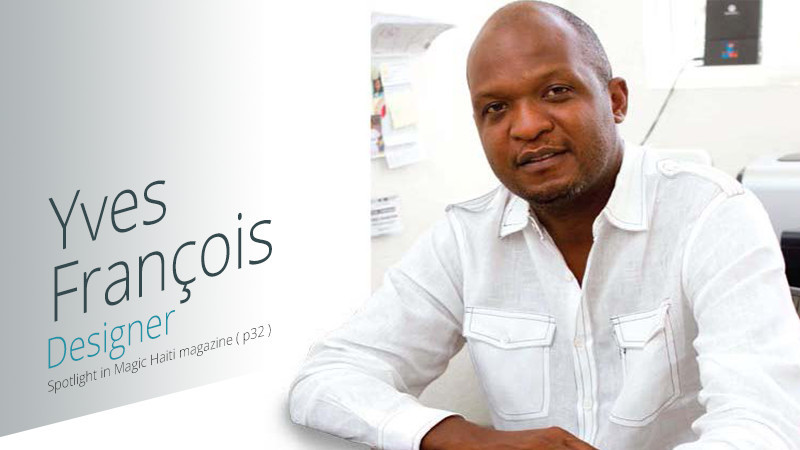 Posted by ycfgroup In News

From Louis Vuitton to linen shirts, one man leaves life in Corporate America to do business in Haiti.

After leaving Haiti as a child in 1971, Yves Francois, President of YCF Group S.A., found himself in the midst of diverse and evolving New York City. Yves’ ambition and drive were apparent from an early age, although he lived in Canarsie, he chose to play street basketball in rough neighborhoods in order to be at the top of his game. His parents worked hard to make sure he was able to succeed; often taking on multiple jobs. Thanks to his family’s commitment, Yves was able to attend the New York Institute of Technology, and eventually the prestigious Pratt Institute. For more than 20 years, Yves worked for some of the biggest names in corporate America, like Phillip Morris, Pepsi Cola, the prestigious Parsons School of Design, and Cable Vision (owners of the New York Knicks, Madison Square Garden, and Radio Music Hall just to name a few). He drove nice cars, ate at expensive restaurants and wore designer suits. He even managed to start his own successful architecture firm on the side.

When Yves turned 40 years old, he was ready to retire. He was at a point in his life that most people only dream of reaching. So why, then, leave the comforts of his New York life and come to Haiti just to start all over again? “Because I think I can make a difference,” says Yves, “I can make money in New York, I can make money in Haiti, but it’s not about the money. I turned 40 and said to myself, let me look into coming back to Haiti.”

Exploring the idea of going back to Haiti, for Yves Francois first involved a whirlwind trip around the globe to visit some of the world’s fastest developing countries – countries that only ten years ago were considered “third world nations.” India, China, Dubai: he wanted to look at countries that had made “big jumps,” as he puts it, before diving into business in Haiti.

When Yves finally arrived in Port-au-Prince in 2006, the only people he knew were his mother and father, who also had moved back to retire. Used to the efficiency of the American business world, Yves struggled to overcome the hurdles of the sixmonth business license process. This process is being streamlined in order to attract and facilitate investment in the country. He landed his first construction job building a stand for USAID employees at Carnival. Now, only a few years later, in a beautiful modern office in the heart of Pétion- Ville, Yves sits behind his large wooden desk which is scattered with paperwork, books, binders, and organizers; the trappings of a man who is in charge of a rapidly growing architecture firm that employs over 150 Haitians. Adorned in a white linen shirt, he has traded the expensive suits of New York for the more relaxed local attire. However, despite the laid-back Caribbean vibe here, Yves still maintains a rigorous work schedule, arriving at his office every day at 6 AM, and often Yves Francois From Louis Vuitton to linen shirts, one man leaves life in Corporate America to do business in Haiti.

“Sometimes people say things like, ‘you don’t want to do it the Haitian way,’ whatever that means.” Yves says, “I am Haitian and I’m going to do it my way.” And the most important part of “Yves’s way” is building the capacity of his employees. To do this, Yves brings in architects and engineers from the U.S. to work side by side with his Haitian employees for one year. Everyone learns from the exchange. “Yves’ way” also includes throwing Christmas parties for all his employees, from the brick masons to the architects, as well as expecting his construction workers to come to work well dressed everyday in shirts bearing the company logo.

It is important for Yves that his employees respect themselves and the work that they do. On one occasion, after hearing an office cleaning lady put herself down, Yves told her how his mother did that very same job in New York City and worked her way into management at the famous Waldorf Astoria Hotel.

“In retrospect, I look back and I can see the difference I made in someone’s life and I can see their body language change, now that they can send their kids to school,” says Yves. “It’s not charity, but a vision to see beyond the next day.”

Yves doesn’t only want to design and build; he has already started to manufacture as well. Currently, he is producing everything from building materials to wheelbarrows. “Anything that can be used in Haiti, I want to make it here,” states Yves. “Haiti has the opportunity to be the Pearl of the Caribbean again, but it is going to take a lot of sacrifice. It’s not going to happen overnight.”

Yves seems to always find great rewards in the sacrifices he has to make. “You start digging a hole and something beautiful comes out of the ground,” he smiles. And it is due to his attitude, his passion and most of all his ethics that he was selected as one of the national finalists of the Digicel Entrepreneurial Competition in the Industrial category last year. The company’s slogan «Rebuilding while Investing in our People» not only reflects its owner’s beliefs but also his company’s mandate. “It was such an honor to be recognized, not just for me personally, but for the company and the entire staff. YCF Group S.A. accomplishments’ are the result of the effort and dedication of each and every employee.”

Right now, Yves is working on a well-known church that came down in the Earthquake called St. Rose De Lima in Lalue, Port-au-Prince. He calls a coworker to bring in a model of what the church will look like. As Yves explains the different aspects of the project, his excitement for its completion becomes evident. “Projects like this are what I wake up for every morning,” said Yves, “you want to put your stamp on it so your kids can say, ‘look at what my dad did.’”